August 14, Monday
The first day of summer holidays
It’s the start of “Bon Dancing Tour”
Ishimitsu and Yanagita have come to Nagoya on Tokaido Shinkansen “Kodama” from Odawara. We bought green tea and lunch and transferred to limited express train. We arrived to Minoh-ota station in the early afternoon.

Minoh-ota is the starting station of “Nagaragawa Railway” which is the semipublic enterprise. It is the actual starting point of our tour.

In the time of Japanese National Railway, Nagaragawa Railway had a tasteful name “Etsuminan-sen (Etsuminan Line)”. In passing, the apparitional Etsuminan-sen was planned to put thorough to Fukui Prefecture. Even now, in Gujou Hachiman Station which is along the railroad line, there is a small railroad museum, and we can tour the railway goods that are the reminiscent of bygone days.
Etsuminan-sen which is loved by the local people is decently included in Bon Dancing Songs.

(From the lyrics of “Matsusaka” of Gujo Dancing)

A picture taken from the wheel window. The outdoor must be hot.

From here, we have a slow ride through the scenery of the countryside in the midafternoon on the Nagaragawa Railway which runs like a bus.

A loungy rest at Gujo Hachiman Station And now, we start out from Minoh-ota.

It was hot inside the train in midsummer as is always is the case, and we spent a long time absentmindedly. My body was in the rhythm of working hours until yesterday, and I had a stifling feeling because I couldn’t get the rhythm of the summer holidays.
A picture taken from the wheel window. The outdoor must be hot.

As we pass Seki City and go for a while, deep green and beautiful Nagara River appears.
From here, the railroad heads north little by little while crossing and going parallel with the river.
The scenery we can see when we weave our way along the beautiful mountains and river along Gujo Hachiman Station is pretty much a different world. If you want to spend a “dead set summer holiday”, I always think that this is the place.

It’s 3 PM.
The loungy Nagaragawa Railroad finally arrived to “Minoh-shirotori” which is close to the terminal point.

As we put our ticket in the collector’s box, we could see the pleasant summer sky from the station plaza. We know that today is the day of Tetsuya (All-night) Dancing Festival since colorful streamers are waving in the wind.

“This must be the site of tonight’s festival”, I said, and we walked around Shirotori Station. It had a relaxing mood, and there were buildings that have the taste of long history everywhere.

We jumped into the local bookstore and quarried for materials about Shirotori Dancing.
I happened to hear a conversation of a pair that looked like university students; “Are you going to go dancing today?” “Hm, the dances of the youngsters are not my type.” They could have been young people who came back to their hometown. Today is Tetsuya Dancing and the town seemed to be a little bit restless.

The streamers are welcoming

We returned to the station in the evening twilight and headed for the lodging of tonight in a taxi. As we tried to draw Shirotori Dancing out from the driver, he readily started to teach us how to dance saying, “If you want to learn how to dance, you have to know how to move your feet.” Just as you’d expected of a place of dancing.

“Private Hotel Iyoji” was a rather new lodge started by a young master near our age.

We had dinner in a buffet that doubles as a restaurant in the 1st floor of the main building. The master cooked and served us with delicious food.
The salle by the side was crowded with groups of students who walked in and persons with families. Everyone must have been in an excited condition before Tetsuya Dancing. Young employees were working busily all the time but the older ones looked rather tired and the master seemed to be having a hard time handling the customer.

The emergence of theatrical performance!

After we were satisfied with dinner and walked out, a beautiful full moon appeared in the sky from brow of a hill.

It was a perfect day for Bon Dancing.
We returned to our room and pulled out our getas and prepared the equipments for coverage.
We got into the long-awaited taxi and headed for the dancing site.
The site changes depending on the date, and today’s site of Shirotori Dancing is the station road.
As we entered the shopping street and got off the taxi, the plaza near the site was already crowded with people. When I thought, “Has the dance already started?” I found out that they were holding some kind of an event.
I found out to know that a theatrical group was acting a performance called “Houreki Gimin Daiko” dealing with Gujo Uprising, commemorating the first day of Tetsuya Dancing.

Dynamic performance. It’s a big drum ,and there is picture of old Covenant under joint signatures behind the performer.

The story seemed to be something like; a group acting as the member of uprising with a mask on their faces dances the dance of independence after suffering from the oppression of the clan.
The circle dance of the young people was very energetic.
What? Isn’t this familiar tune that of “Yacchiku” of Gujo Dancing!?
The spectators exploded with applause and we had an exciting time for a while.

Shirotori Dancing is in the same “Cultural Area of Bon Dancing” with Gujo Dancing, and there are common lyrics and dances. People of the town said that; “When I was young, on the day of Tetsuya Dancing, I used to go all the way to Gujo Hachiman and danced until morning after dancing Shirotori.
Finally, to the dancing site!
The event has ended, and we all moved on to the “Station Road” which is tonight’s dancing site.

The site was rather small compared with Gujo Hachiman, and the dance circle seemed to be size smaller than that.
However, the handmade Bon Dancing that we enjoyed in the village of the mountain valley of the headwaters of Nagara River had a unique fascination a bit different from that of the lively Gujo Hachiman.

Move on to the dancing site. Kiriko Lanterns flutter

The first tunes were things like “Kawasaki” and “Harukoma” which are common with Gujo Dancing.

Dance around the dancing scaffold

We were familiar with these songs a little bit, so we joined the dancing circle readily.
The starting song of the dance that we hear after a year always gives us a unique happiness. I recall the feeling of geta with affection.
I felt that the tempo of the musical accompaniment was somewhat different from that of Gujo Hachiman.
In the course of time, a song unique to Shirotori starts.
It is said that Shirotori Dancing’s “rhythm is fast and it is a dance for young people” if you compare with Gujo, and it is very curious to know which dance will come next.
First of all, “Neko no ko (kitten)” was interesting.
You raise your hands in the order of right, left, and then both, and turn the wrist around. It is just like a “cat’s punch”. It is said that “Neko no ko” brought in the gestures of a kitten, and it is a dance which is distributed around Gujo area. I felt that it is more realistic than that of Gujo Dancing.
Rapport between the dance and the body
After distinctive songs of Shirotori, such as “Yassaka” and “Oisaka” continued, the dance goes to the controversial “Jindai”.

As the dance begun, I couldn’t understand what was going on since the movements were so fast. In the course of time, screams and laughter were heard. Three steps forward and turn around abruptly¨turn back and three steps backward¨turn around again. This is very intensive and won’t allow the beginners to take a breath.
We are beginners, and of course we can’t keep up with the timing of the turn. Therefore we bump against people in the back and front of us, and in other case someone steps on our feet with their getas. Similar scene are observed everywhere and people laugh each time it occurs.
As we dance the same dance together, and knock up against each other’s body, the dance circle loses its stiffness, and it seems that we are sharing a confidence with each other. In the topsy-turvy, I was thinking in my mind that “We can’t enjoy this kind of fun in Bon Dancings in a big city.”

By the way,
There is a gesture that everyone raises both of their hands to the front and dangle them in front of their bodies (just like to pat the shoulder of the person in front) when they move forward in a row. What is this?

I found out to know that the fact is, until a little while ago they danced with their hands on the shoulder of the person in front. It turned out to be that the young people of today are bashful about putting on their hands of the person (a guy, or a lasso) in front.
We know from this that it’s not only in the big cities that people are becoming less good at coming contact with each other. But I think that everyone actually wants (don’t they?) to put their hands on the shoulder, and also, it would be a lot of fun if everyone hold their hands together in a circle.

Everyone is relaxing gradually.

Dance of the young people

The dancing circle of young people It was fun dancing after all, but it was a little bit tough for the 30s who lack exercise.
Yanagita felt dizzy and woozy due to lack of sleep. Ishimitsu felt pain in the muscle of the back of his feet. We faced a rocky road ahead when we had two more days of news gathering on Tetsuya Bon Dancing.

We felt compelled to get out of the dancing circle, and rested for a while in the corner of the street. Just at that time, in that place, a group of young people was making a small dancing circle of their own and seemed to be enjoying their dance.
Could they be the young people whom we saw in the afternoon who came back to their hometown and were delighted at their reunion?
Those who want to dance make their own dancing circle. We felt envious to the scene.
PM 11:00 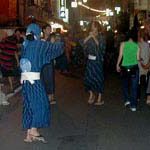 The dancing circle of young people

We were tired to the highest level, as might be expected, and we decided to go back to the lodge.
We knew that the real part of Tetsuya dancing will begin from now on, but as we had 2 days of hard schedule left, we decided not to push through. We decided to be on the safe side, and left the dancing site.

We drank beer, and watched the National High School Championship held at Koshien Stadium on TV. This is the best part of the summer holidays