When we say Obon, in many cases it relates to a few days around August 15th.

However, Obon is originally an idea which has some range, and the span was for about a month. The days around August 15th were so to say the “climax” of Obon.

Here, we would like to study “”When” is Obon?” from the view point of “the length of the period” and “the climax”

Obon lasts for a month?

If we order the events of Obon in time, we can see that various events were held for nearly a month from the beginning of preparation that is, under the lunar calendar, around July 1(some regions begin even earlier) to the wind-up event that is held in the end of July.

Actually, July of the lunar calendar was also called “Bon Zuki (The month of Bon)”. Obon in the broad sense is a great span of festival season that could also be called “Obon month”. The scale of this event is very big, so you cannot call it an ordinary annual event. So, it is certainly natural that Obon is called the “National Event” of Japan together with the New Year.

Obon and Bon Dancing Among the Bon Dancings, Gujo Dancing (Hachiman-cho, Gujo, Gifu Prefecture) is famous for the long dancing period.
When I heard that they dance for more than a month, I thought “It is extraordinary”.
However, if we consider the fact that Obon originally had the length of a month, now I think that the conditions of lengthening of the dance existed in Japanese Obon from the beginning. 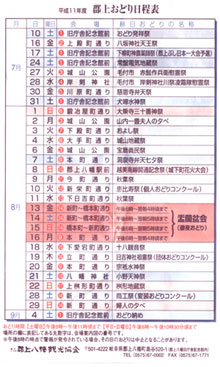 The schedule of Gujo Dancing (Heisei 11; Gujo Hachiman Tourist Association)
We can see from this that the period of dancing is more than a month; from July 10th to September 4th.
The Climax of Obon
*If July of the lunar calendar is “Bon Zuki (the month of Bon)”, the few days around “July 15th” would be the focus of Obon as a whole, so to say the “climax” of the event.
The position of the “focus” of Obon is 13th to 16th of either July or August focusing on the “15th of July or August” in most regions, and this tendency does not change whether it is Shichigatu Bon (Bon in July) or Hachigatsu Bon (Bon in August) or Kyu Bon (Obon of the lunar calendar).
And as we see in the following “The events of Obon”, core events of Obon, such as “Mukae Bon (Bon event to greet the ancestor’s spirits)” and “Okuri Bon (Bon event to send the ancestor’s spirits off)” are scheduled during the 13th to 16th of July or August.

*Why does “the 15th of July or August” become the focus?
The Buddhist event “Urabon-e” has been held on July 15th from a long time ago, and it is no doubt that this schedule is affecting Obon as a folk event.
However, if we observe from the folk aspect, and as we saw in “The relationship with the full moon”, “the 15th of July or August” originally had various reasons to be the focus of Obon, and we can consider that Buddhism provided a shape (explanation) to this.