One of the attractions of Nishimonai Bon Dancing is its unique and beautiful fashion. The black hoods called “Hikosa zukin”, and costumes sewn with silk cloth called “Hanui Ishou” are typical. You can feel the history and individuality of each families not like “Soroi” dancing costumes that we can see in various places around the country these days.

Dancers who are minority women put on black hood which is called Hikosa-zukin.
Since they pull it over their head leaving only the eye, you cannot tell who is the one who is dancing with it. (Some people can distinguish by looking at the yukata they are wearing). It can be considered that this represents the figure of “Mouja”.(Another name for Nishimonai Bon Dancing is “Mouja Dancing”) By doing so, it is showing by shape the the aim of Bon Dancing, namely “Have the spirits who came back in Bon season, dance together and have fun”
About the origin of Hikosa-zukin, there are theories such as “Hana-fukube” of the Yuri region of Akita Prefecuture, a theory that says it has relations with “Hanko-tanna” of the Shounai region of Yamagata Prefecture, a theory that says it was inspired by Kuroko of Kabuki. However, none of these have clinching evidence. We have to take into consideration that there are other Bon Dancings that dance with masks such as Bon Dancing in Tsuwano Shimane Prefecture. And also, a fashion that “Kabuki-mono” wore masks became popular in the Azuchi Momoyama Era.

Adult women put on elegant Amigasa. It also has an effect to cover the face like the Hikosa-Zukin, and they pull their Amigasa over their head.
Kasa appears frequently in the entertainment of the Middle Ages, and it was considered that spirits gathered under the Kasa. Also in many cases, decorations such as floweres were attached to Kasa as a Yorishiro of spirits. Red decoration put on Amigasa of Nishimonai might be traces of it.

Young girls who put on Hikosa-zukin wear Yukata. In Nishimonai, we can see many Yukatas dyed with indigo that has strong individualities and a wide range of varieties.
Its beauty is sweet somewhat different from that of “Hanui”. 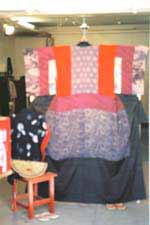 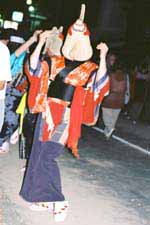 Something that represents the pride and tradition of Nishimonai Bon Dancing is this “Hanui” costume. They say that old ones date back all the way to Azuchi Momoyama Era
In ancient Japan, dresses were important properties, and women used to gather even fragments of small clothes carefully. “Hanui” is being made by stitching together these fragments of silk from generation to generation. There is a principle that fragments of silk must be “stitched together symmetrically with respect to right and left”, and this helps it to be finished in a sophisticated design. Although a long period of time of stitching, it doesn’t become messy.
The families that have “Hanui” is limited, so it is valued very much as a symbol of the family that has been passed down from mother to daughter, generation to generation. Daughters are allowed to wear “Hanui” only after they are approved by their mothers that they have attained womenhood. Therefore, daughters were especially happy when they danced in “Hanui” for the first time.
We can see many “Hanui” in August 18th, the last day of dancing. This is because dancers become drenched in sweat after they dance a day, so they don’t want to wear it until the final day, or the 3rd day. Also, they say that it is “from the Showa Era” that they started wearing “Hanui” in Bon Dancing.
“Hanui” is decorated in the storefront in the streets, and we can also see them in the exhibition of Reference Hall of Ugo Town.

Another characteristic of Nishimonai Bon Dancing is that dancers decorate their waists by putting a cloth called “Shigoki” at their belts.
The cloth of “Shigoki” is very colorful such as red, yellow, etc. Usually in Bon Dancing, there are many regions in which they dance with “Torimono” (Something you hold in hand) such as “Uchiwa”, “Sensu”, “Bonten” which becomes a Yorishiro of the spirits, but in Nishimonai, it seems that “Shigoki” acts as a Yorishiro.

Basic footwear would be zori (Japanese sandals) on tabi so as to fit with fascinating costumes. Tabi would be Shiro-tabi (White tabi). Zori would be a stylish one with red and white thongs.

Although female beauty is emphasized in Nishimonai Bon Dancing, men are also trying hard to take part in the dance. I once saw a dancer and thought, “Oh, a well built woman is dancing.” only to find out that she/he is a middle aged man wearing female dress. Dancing in a female dress can be a type of “disguise” which is a traditional clothing of Bon Dancing. However, the dance is sophisticated and beautiful and better than that of highschool dancers. When we saw them, they sometimes made passes at female audiences and enjoyed dancing.