The essence of the dance

The world when Bon dancing was born, grew up, gathered ground, and have been actively enjoyed- before the highgrowth period in Japan- was a “world where people did not use letters in the daily life”

Letters that are flooded around us, such as news papers, magazines, computers, and e-mails did not exist (even more, TV) at that time. Therefore, it was a world where “things beside letters” such as “words” and “songs” that are communicated by human voice, “dances” that are expressed by body movement, various “ceremonies”, and “natural phenomena” had rich and important power of message. It was a society which was “in it’s own way a very rich one where people was satisfied without the letters”*

We, who live in the present times, can feel the power of these communications we have forgotten bring back when we are dragged in to the excitement of Bon Dancing.

Before we take a look at the form of art of Bon Dancing such as “dance”, “songs”, and “outfits”, we would like to fully recall the fact that how strong these things had the message of power. Let’s begin, then.

*Extracted from the book by Junzo Kawada “Koutou Denshouron (Thesis of oral tradition)” published by Kawade Shobou Shinsha
We say Bon Odori (Bon Dancing), but we don’t say Bon Mai (Bon Dancing) do we ?(The meaning is almost the same in English, but the word is different in Japansese.) In Bon Odori, there is a reason why it must be “Odori”. “Mai” and “Odori” looks the same but they are different. We’d like to clarify the essense of “Odori” by comparing these two.

“Mai” and “Odori” are both “Ugoki (movement)”(physical expression) which will be the elements of Japanese public entertainments. We can say that not only the movement is different, but their meaning as public entertainment itself is different.
Although it is a classical diagram, a lot of important contentions related to the form of art of Bon Dancing will come about by comparing these two.
The chart of comparison between “Mai” and “Odori” 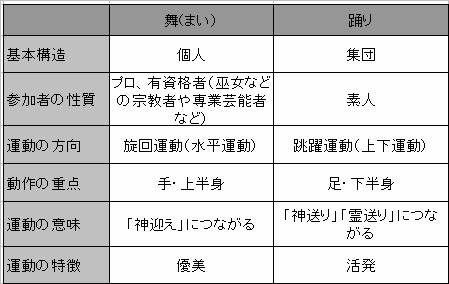 This was made out refering to the books such as “Minzoku Geinou Jiten”, “Geinou Jiten”, both of which are published by “Tokyo-do Shuppan”.
In the following, we would like to see about each of the contentions.

Mai is a public entertainment that starts from one person. There are Mais that are danced by plural number of persons, but it is quite natural that Mais are danced by one person, and it is rather a basic form. However, Odoris mostly don’t start by one person. The basic form of Japanese Odoris are danced by plural number of people or in groups. This is a very important point which can also be called the basic nature of Bon Dancing. Since everyone of the village welcome and send off the spirits of the ancestors, Bon Odori must be “Odori” which everyone can participate.
And now, since they “dance in groups”, from the aspect of the form of dance, the issue of “The form of groups = formation” comes about. (We would like to touch on this issue in the next section, “The group conformation of Odori”). Also, from the aspect of the choreography of the dance, it leads to the characteristic of Bon Dancing which “dance with the choreography in unison by the members of the group”.
In this manner, “collectivity” is an essential charactiristic of Odori which relates to the form of art of Bon Dancing.

The nature of the participants/h4>
What kind of people dance Mai or Odori ? What comes to our mind when we think about a person who dances Mai are people such as person of religion like shrine maiden and specialists of public entertainment. In other words, people who have special talents and certifications, you may call these people “professionals”.
Even in cases when ordinary village folk becomes a dancer of Mai, he/she devotes himself/herself by undergoing meat taboo, and get qualification as a Mai dancer by having a lot of practices. So, Mai dancer is not something anyone can become. We may call them “limited participants”.
In the other hand, since Odori is a public entertainment of groups, it needs to be participated by many people. In case of Bon Dancing, this tendency is very strong, and it features in the “doors wide open to everyone” which even amateurs and strangers can participate.* * There are also Bon Dancings that the participants are limited. (We would like to address this issue in the section, “People, organization”. However, we can say that the basic characteristics of Bon Dancing is that “many people can participate”.

The direction of the movement

The characteristics of the movement of Mai are “turning” and “rotation”. The image may be like moving the feet slowly as if to trail the feet on the ground and adding the turning movement. Some people point out that from the point of view of word origin, the word “mau (dance Mai)” has a close relationship with the word “mawaru (turn)”.
In the other hand, the characteristics of the movement of Odori are “jumping movements” and “up-and-down motion”. Even now, we often use the expression “odori-agaru (fling oneself about)”. In Bon Dancings and Nembutu Dancings around Japan, we often see dances with vehement movements such as running and jumping.

The major emphasis of motion

In Mai, the movement of the hands and upper body has an important meaning because it has to emphasize the turning motion. In the point of “hands”, we can often see “Torimono (gears)” such as fans and bells.* *However, we can frequently see people bearing fans in Bon Dancing too.
In the other hand, since Odori is a jumping movement, the lower body and the feet becomes impotant. We can understand that the movement of the feet is being emphasized from the fact that the Chinese charcters that could be read as “Odori” such as “yoh”, “yaku”, “chou” are composed of the parts meaning feet.

The feet is the basics of Odori (Gujo Hachiman, Gifu Prefecture, August 31, 2002)

If we consider from a typical pattern, the image of “Kami-mukae” of Mai is, the shrine maiden having gear(s) in her hands turning slowly in a graceful manner, finally becomes gradually possessed by the supernatural. In the other hand, the image of “Kami-okuri” is, dancing and jumping lively in groups, and sending off various spririts out of the community. *In Niino Bon Dancing, they call the last event of Okuri (sending the spirits off) “Odori Kami Okuri”. The name shows the figure itself, that is, sending the spirits off while dancing Odori. This is a good example showing the close relation between Odori and “Kami-okuri”.
We believe that the essence of “Odori” has become clear little by little from the arrangements above. In the next section, we would like to touch on the specific form of art of Bon Dancing such as, “group conformation” and “choreography”.