Group pattern of the dance

Bon Dancing is not a public entertainment by special people=the professionals but a public entertainment for amateurs “to be danced by anyone”. Therefore, as the form of art of Bon Dancing, the issue of group comformation “or, in what figure (formation) will the groups become” will be important at first.
In particular, it is the issue of whether it is “Wa Odori (Circle Dancing)” or “Kohshin Odori (Marching Dance)”, and it has always been mentioned in the researches and reports on Bon Dancing to this time.
However, as we keep searching on it, there are a huge variety and a rich content in the group conformation of Bon Dancing, and we come to know that there is a fascinating aspect that we cannot capture simply by the two types.
*Regarding the group conformation of Bon Dancing, the terms and the concept of classification were not constant depending on the researchers and writers, and it may have been difficult to understand.
And so, in this site, we decided to make an original draft proposal on classifying the group conformation of Bon Dancing. 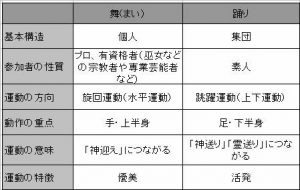 Chart: The draft proposal on classifying the group conformation of Bon Dancing

*Notes: There are many Bon Dancings that fall under the category of plural types, so please note that one Bon Dancing do not always fall under one category.
This is a draft proposal after all, so we would like to keep improving it through the encounter with new Bon Dancings and researches and discussions.

In the following, we would like to touch on the characterstics of each types of dances.
* The charcteristic of this draft proposal is; (1) We have distinguished the issue between 1) The place of dancing and 2) The group conformation (Regarding the Place, we have sorted out in the “Space of Bon Dancing”) (2) Traditionally, the issue was mostly argued only by types 1 and 2, but we have added three types, 3,4,5.
2. Wa Odori (Circle Dancing) type
“Wa Odori type” is a basic group conformation that represents Bon Dancings in Japan. Or we could rather say that it is a basic form of dances of various nations around the world. It is a form which could be seen most widely through traditional and modern type of Bon Dances.

In the West, there are many circle dances that people form a circle by holding their hands, but that form is seldom seen in the circle dance in Japan. However, the existence of Bon Dances that people hold their hands are verified in Gifu Prefecture and Ryukyu Ko (Ryukyu islands including the islands of Kyushu and Taiwan) by the researches of Yasuji Honda and Hiroshi Hoshino. In Shirotori Dancing in Gifu Prefecture, a rare dance that people form a circle by putting their hands on the shoulder of the person in front can be seen.

The circle of the dance are sometimes danced in double circles and triple circles when there are many people participating in the dance.

There are a plural number of dancing circles in this dance. <2003, September 13, Aoyama Baoisou-in>

The relation with the place of the dance

In the aspect of the place of the dance, there is no limitation in Wa Odori type. It is danced in almost all the places which we have mentioned in the section of “The space of Bon Dancing”
Also, in the type of “Moving Dancing Type”, Wa Odori is held in each dancing site of the destination.

The movement of the group

The group conformation of Bon Dancing relates to the form of art which is other than dances themselves. Wa Odori type has a strong relation with long Bon Dancing songs such “Kudoki” since it is suited for dancing long hours in certain location. Also, it can be considered that most Kudoki type of Bon Dancings around the nation are Wa Odori type.

The history of Wa Odori

If we observe from the historic point of view, the form of Wa Odori can be verified in the “Ippen Hijirie (A religious picture scroll that drew the achievements of Saint Ippen)” drawn in the last days of Kamakura era. The Odori Nembutu of Odagiri no sato (The village of Odagiri) in Shinshu region which Saint Ippen danced Odori Nembutu for the first time reminds us of the present Bon Dancing of “Wa Odori type”.* We have to pay attention to the fact that the followers of Jishu sect started dancing the dance quite naturally by “Wa Odori type” in the memorable first Odori Nembutu and that it was not Koushin (Marching) type nor Retsu Odori (Line Dancing) type. It is because from this fact, we can imagine that there was the culture of Wa Odori in other public entertainments and folk customs preceding the dance by the followers of Jishu sect. However, in the present, the historical materials that show what kind of content they had is not found yet.

The aspect of faith of the individual is strong in the “Odori Nembutu” of Ippen, so there is a little bit resistance to call it public entertainment. However, it is a case example that serves as a reference when we study about the history of the form of art of Bon Dancing. For the reference’s sake, it is more than a century after the Odori Nembutu of Ippen that we can verify the emergence of Bon Dancing in the documentary records.

In the center of Wa Odori

By the way, as is touched in the thesis of Onodera, we are anxious to know about what is in the “center of Wa Odori”.

In the Furyu Odori (a type of dance, “furyu” means elegant) which is the infant form of Bon Dancing, people put bamboo hats and Tsukuri-mono (figures) and they call it “Naka Odori”(“Naka Odori “means the figure itself and the dance around it). And they danced te-odori (a dance danced by people waving their hands) around it, and they called this dance “Gawa Odori”. It is considered that Naka Odori has brought in the anchorage of spirits which was used in Furyu Hayashimono (Hayashimono is a folk event that send off the gods and evil spirits by people moving in procession while cheering at the gods and evil spirits) before. It seems that some religious folk meaning was put in the center of Wa Odori.

Kozo Yamaji adovocates a theory that in the Edo era, the Naka Odori in this Furyu Odori has dropped off and Gawa Odori has gone independent and became Wa Odori (circle dance)=Bon Dancing.*

Presently, there are many cases in which the dancing scaffold is sited in the center of Wa Odori (circle dance), but it seems that there is no longer religious folk meaning in it. However, there are places such as Niino Bon Dancing where they clearly leave the religious folk meaning by hang
ing the Kiriko Lanterns around the scaffold while people dance around the Kiriko Lanterns.