11.Talking about Bon Dance in Hawaii : Professor Judy Van Zile from The University of Hawaii 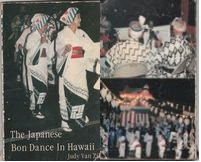 We were blessed with an honor to have a talk with Professor Judy Van Zile, the author of the book called  “Japanese Bon Dance in Hawaii” which became an opportunity for us to visit Bon Dance in Hawaii. We were impressed from the bottom of our hearts to her views concerning the Japanese dance and clear explanation such as the classification between Eisah and Bon Dance, the religion and dance giving examples from the dance of the shrine maiden and Bon Dance, stories about Kabuki and Noh. We would like to mention simply the contents of the interview as follows;


◆Ethnology and cultural anthropology differs in the “the scope of the target they deal with” from folklore.

―We have heard that you are specialized in dance ethnology. Could you tell us the difference among ethnology, folklore and anthropology?

Folklore is a rather limited concept. For example, ethnology deals with Kabuki and Noh, and even modern jazz dance, but folklore does not deal with these theme. Ethnology is characteristic in the meaning that it deals with wide range of targets. Anthropology is in a close relation with ethnology and it even ovelaps in some fields.
In Japan, Mr. Sasamori (Mr. Takefusa Sasamori, specialized in ethnomusicology) is famous in this field.

◆Probe the cultural background from the shape change of the dance

― What do you study in dance ethnology?

―Our basis is “history”

It is so. In dance ethnology, the important thing is, how you observe the relation between culture and dance

―In what opportunity did you decide to major in dance ethnology in the beginning?

At first, I was doing the analisys of the dance only. However, I couldn’t answer at first to the question by the students, “Why did it turn out to be to that movement?” From these reasons, I started to study dance ethnology in the meaning of searching the backgrounds of how the dance was born.

―In which field are you giving the highest priority?

I am studying Korean dance for more than 30 years. Korean dance is not a community dance, it has technical movements, and there are many types of dances. It is something very interesting. I have brought a book I wrote. “Perspectives on Korean Dance”. Please read it.

―Are there any point in common between Japanese dance and Korean dance?

I am frequently asked the same question by the Korean people, but I think there are not many direct points in common. As for Shin-Buyoh, Korean people call this Shim-muyoh, and there are certain degree of influence to Korean dance from it.

―What kind of meaning was there for you in studying Bon Dance?

―What do you think is the characteristics of Bon Dance?

―I found in the book you wrote, and we too agree to the fact that the looseness and the easiness to enter the dancing circle are the characteristics of Bon Dance. What do you think about the relation with the events?

Oh, you are talking about the relation with Buddhism. For instance, Miko-mai (shrine maiden’s dance) is integrated into the religious ceremony. I think Bon Dance is related with the ceremony, but it is not a part of the ceremony. For example, even though it is performed in the same temple, it is performed after the Bon events are finished; so I think there is a classification like this.

―I see. In case of Japan, there are Bon of the temple, and Bon of the village, so we can see the classification in these meanings.Certainly this is the point. In Japan, some dances die out when there is nobody to succeed the chorus leader. Are there similar problems in Hawaii?

It depends on the case. Bon Dance Clubs are maintained, and each of them are continuing the practice.

―Are there any Bon events in Hawaii?

We decorate the grave, and it could be a little bit commercial, but we send off the spirits of the dead on lanterns floated on the waters of North Shore.

―What is the characteristics of the Bon Dance in Hawaii?

There are different flavor for each temple. Since Bon Dance Groups make rounds to the temples one after another, we can consider that the period of the dance has extended, that is, June to September.

―Have you ever been to Japan?

Formerly, I have visited Japan, and had a chance to watch Awa Dance Festival. Come to think of it, you have been talking about Kachashi in Bon Dance, don’t you think that the culture in Okinawa and that in Japanese mainland is different? In Eisa, the Lion dance comes in, and there are other new dances.

―What kind of students are there in your study?

The method of ethnology is common, but the subject varies. Some students become dancers and some become scholars after they graduate.

―Are you interested in modern dance, such as break dance?

Break dance. It is interesting. There are dancers who have magnificent talents in break dance. When it comes to the issue regarding “dance”, I am generous. How many members are there in your Shonan Bon Dance Workshop?

―Basically three. Although we collaborate with other various people…We are amateur group to the end.

Oh, I see. Although you call yourself amateur, you are doing a very interesting job.

―Thank you very much. We are very impressed to have a chance to talk about various topics with you today.

Professor of the University of Hawaii. She majors in dance ethnology. She has been studying dances of various places of Asia and Africa. She drew up dance score records of Hula, Bon Dance, and Korean Dance. She is especially famous for her studies on Korean Dance, and her book, “Perspectives on Korean Dance” was recognized as an outstanding publication in 2003, by CORD (Congress on Research in Dance).

This book was published by Professor Zile in 1982.The contents are, the history of Bon Dance, the history of Japanese immigrants to Hawaii, the study on the changes of Bon Dance in Hawaii. The point that we should mention specially is; it arranges the changes of Bon Dance in the modern through contemporary period by laying the basis on the interview to the people concerned and related articles. Also, the music is described in a musical score, and the dances are recorded by Labanotation and illustrations. It is a very clear and comprehensive study, while it is not a very thick book, so those of you who are interested in this book please read it. Secondhand books are available in the internet.