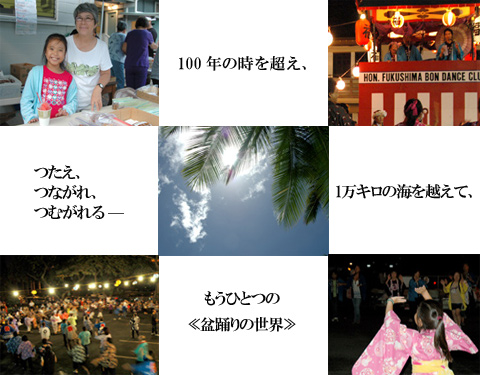 “Bon Dance” grew up in the Japanese Archipelago.
As we enter into the modern era, its stage expands into a global magnitude at once.

By the time we enter into the 20th century, many Japanese immigrants went across to the so-called the new world such as “Hawaii”, “California”, “Brazil”. Before long, Bon Dance started in the Japanese community which they created. They were the intrepid and the dynamic first-generation who went across to the foreign land far away from home. The second generation and their descendents who overcame the difficulties of discrimination, exclusion, war and created a strong position in the host society. Bon Dance was their own joy and support for these Japanese descendents and settled into the community.

Later, the Bon Dance of the Japanese community grows up as a unique culture after experiencing import of the Bon Dance culture from the Japanese homeland, and adding dances which were created on site. Now, it is taking firm root in the new home as “Bon Dance”, the largest event in the Japanese descendents’ society catching up people of various ethnic groups.

On the other hand, after the war, Japanese which are different from the immigrants before war actively advances overseas. Japanese society, made up mainly by expatriate staff came out in the major cities worldwide, and Bon Dance also found a new home in each of these places.

Bon Dance that crossed the ocean is not only those mentioned above.
“Hokkaido immigrants” went to Hokkaido for reclamation and to work for the coal mines. “Okinawa immigrants” created immigrant communities after going to the “inland”. Even within the Japanese archipelago, there are various immigrants (inland immigrants), and they passed down various culture and tradition of their hometown. Bon Dance and dance songs which they passed down are also taking root in each land and they are enjoyed by the people.

And how are they in the present times?
There are already approximately 300,000 immigrants mainly Japanese-Brazilian living in Japan. This summer, a comｍemorable Bon Dance circle came out in a town in Gunma Prefecture where many Japanese-Brazilian immigrants live. This means that Bon Dance that reached South America: the other side of the earth 100 years ago, came back once again to Japanese Archipelago after 100 years of time.

“Bon Dance that crossed the ocean” taught us that folkloric performing arts along with language, music, and cooking can have a strong vital energy that could get across the wall of national border and ethnic groups. It is extraordinarily large in its scale and dynamic. We might be pursuing something that might be called “Bon Dance Culture”

It also became a commemorable year for us that opened the door of Bon Dance overseas. We send this small report as a step for another unknown “The World of Bon Dance”. We greatly appreciate if you could give us any feedback or opinion.