1.The distribution of Bon Dance in the overseas.

Bon Dance in the inland of Amazon?

The first time we heard this story, we really doubted it.

Although we have been visiting around Bon Dance within the Japanese archipelago, we did have the information that Bon Dance seems to exist overseas. But we thought that those must be occasional events or cross-cultural exchange, and never believed that there are areas that people dance Bon Dance every year.

However, we became to know that the information is certain.
Bon Dance even existed in Brazil, South America! And it is even taking root as an annual event, not a single event, and still now, it is actively danced every year. But why in Brazil?

The question turned into a conviction after we reached to the keywords “Immigrants”, “Japanese descendents”.

“Bon Dance has a far wider expanse than the Japanese archipelago!!”

We finally realized the importance of the fact in the year 2008.

More than 70 years has already passed since Bon Dance has reached the furthest place on earth.

Bon Dance spreads to the world

When we got down searching for information, we happened to find many of them. We came to know that more-than-expected numbers of Bon Dance are danced overseas.

Now that we know this, we became curious about the point that “How are Bon Dance distributed in the world now? We focused on the Bon Dances that are danced every year consistently as annual events, and plotted them on the world atlas. As a result, it became clear that Bon Dances overseas appear to be geographically biased. 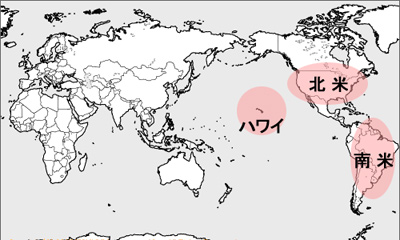 What are common in these 3 areas is that these are the frontier areas in the world history, called “The New World”, and at the same time, they also were the main areas that absorbed Japanese immigrants since the Meiji Era.

The types of Bon Dances overseas

In the other hand, we came to know that in the overseas, there are Bon Dances which are different from those of the Japanese immigrants’ society.

After WW2, company employees that made advance overseas gathered and formed Japanese society such as “Japanese Association” in many cities around the world. There are many cases that Bon Dances are held as an annual event of the Japanese society. And these Bon Dances are distributed not only in “The New World” but in main cities around the world. Further, informal ones, temporary ones, and ones that are hard to grasp the number seem to be danced in various occasions. 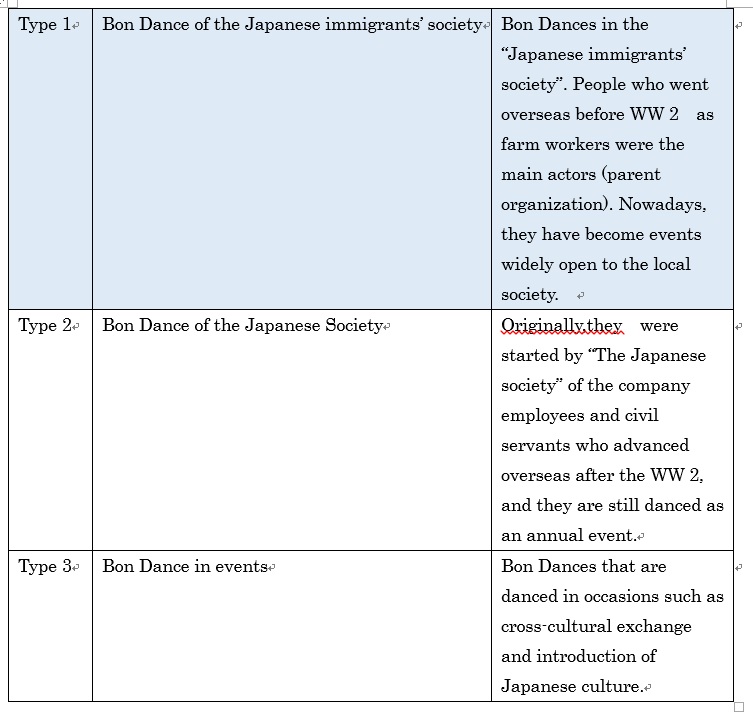 Of course, this classification is expedient, and there might be cases that each type is lapping over. However, it became clear that various types of many Bon Dances are danced every year in the overseas.

We apprehended the distribution area of Bon Dances within the Japanese archipelago, but after knowing this fact, it spread worldwide at once. Among these Bon Dances, Type 1 “Bon Dance of the Japanese immigrants’ society” is the main type of Bon Dances overseas in both quality and quantity.